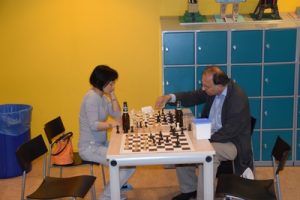 2) My favourite combination is from the game against Evgeny Vorobiov from Cappelle la Grande Open tournament where I found some pretty geometrical motives to win the game.

3) My favourite endgame is from the game against Matheau Cornette from Metz Open in 2012 in which for long time looked it like a dead draw but end the end I managed to win this game because my opponent had too many pawns on the same colour of his Bishop. This game was a vital because at the end I shared 2nd place in that strong Open tournament.

4) The best move of my life was the Queen sacrifice 30 Qg6!! from the game against Anthony Miles in Hastings Premier 1995-1996 which was a vital game for a good result in that strong tournament ( shared 1st to 3rd place ).

5) My most painful blunder was against Kevin Spraggett from Zagreb closed tournament in 1993 in which I could not win the game assessed by computer plus 9 for me.

6) My most interesting preparation was from the game against Vadim Milov from French Top 12 League in 2007 in which I managed to find the improvement in one of the rare and sharp variations of Gruenfeld Opening. This win was important for the result of the match because surprisingly then my club Cannes Echecs managed to beat 5-0 with 3 draws the favourite team from Paris for which then was playing Joel Lautier.
7) My strongest victim was Alexej Shirov in Yerevan Olympiad 1996 in which game I found the unexpected sacrifice 21…Bg5! which turned the tables in my favour. It was a typical case of combination in the middlegame.
8) My most beautiful loss was from Cappalle la Grande Open 2007 against Vugar Gashimov in which my opponent played the brilliant Rook sacrifice 20 Rf6!! after which the game lasted only 5 more moves!
9) The greatest affect to me had the games of Akiba Rubinstein, I was then about age of 15 and I switched from 1 e4 to d4 after that and started to answer 1 e4 with the Classical 1…e5.
10) I learnt most in chess from then my coach IM Vladimir Bukal Senior. He thought me to play French Defence with black on 1 e4, Benko Gambit with Black against 1 d4 and Fianchetto Systems with White against Queens Indian, Kings Indian and Benoni. Then I used to learn from the books the games of the famous Hungarian grandmaster Lajos Portisch who was an expert of Fianchetto Variation of KingsIndian with white.
11) If I would start learning chess another way then I would learn more the Open Openings with White starting with 1 e4.
12) My best win I am proud was winning the strong Frankfurt West Rapidplay in 1995 with 9,5 out of 11 ( later this tournament moves to Mainz ). However I was not rewarded for this win the next year playing in the 2nd invited tournament ( below group Giants ). http://ratings.schach-chroniken.net/ccm/ordix/1997/9718-000-FWS.htm
13) Difference between Supergrandmasters and Grandmasters is in knowledge of endgames and in openings Supergrandmasters I think work together in groups with the best coaches ( trainers ).
14) The most useful advice I got was never to get into time scramble.